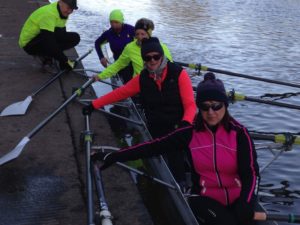 Last week I went rowing after nearly a whole summer off.

Our new ‘head’ of our Rowing group, who knows how my mind works, kindly offered to take me out in a double, so I could ease back into things without stressing that I was holding others up because I had got unfit.

We soon realised that I was causing us to row to the right. I was dropping my right shoulder and doing something that created more power on my left. Neither of us were quite sure exactly what it was I was doing, or why – it could be that I think my let leg is longer than my right so it was putting down more power, or it could be that I am left handed, though interestingly I use my right hand for most things that require power rather than dexterity (like tennis).

The point is though, that I knew how to sort it out, using my Alexander Technique Principles:

1. I needed to make sure I had my competitive ‘power at any price’ switch in my brain switched off.

2. I needed to use Conscious Mental Instruction to tell my body what I wanted from it, which was this: 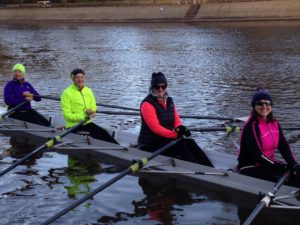 I was able to achieve this fairly easily! One of the reasons being that I have practised for many years giving my body conscious instructions, and the other that my rowing partner gave me permission to ease off on the power so I could concentrate on technique. So I had no pressure of expectation, or particular fear, both of which generally override any conscious instruction I might give myself.

These principles of changing attitude/thinking, combined with relaxation and conscious thinking, can be applied to all sorts of problem solving!

And PS, thanks Darren for being such a great rowing partner and understanding coach!

And PPS no it’s not that cold yet – these are photos from last winter! 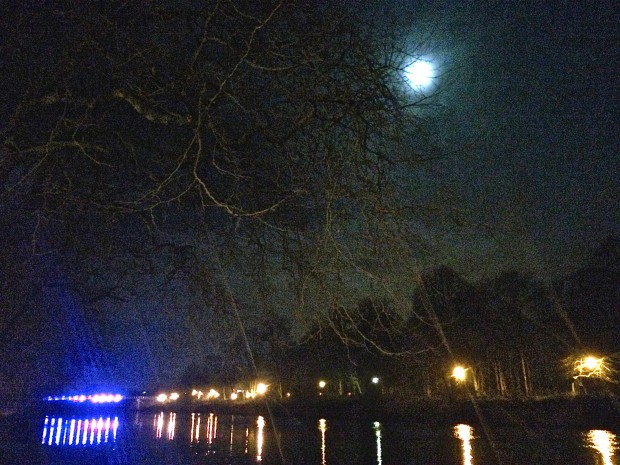 I began this Year at my favourite place in York – down by the river, near the Millenium Bridge.

I had spent the previous half hour taking part in a meditation shared by others around the country, reflecting on 2014, starting at the end and going back to the beginning. I have had a number of years that in many ways had been pretty challenging, and it was a joy to me to allow my mind to take me wherever it would, and to find for the most part, joy and gratitude.

Then each of us paused to see in the New Year as we wished, and followed that with another short meditation, finding our way into the New Year, and finding a word that connected us to the Year.

I have seen firsthand in my own life what it means to say YES, even when it seems frightening and there are many unknowns. It took me a couple of years of fear and vascillation before I I could say YES to moving to York, and now in just three years, I have a wonderful stockpile of memories and and experiences for which I am enormously grateful, and which would not be there without that initial YES.

What is it that you would like to say YES to in this coming year? Give yourself some time and space to write.

Write down whatever it is that you would like to say YES to, and then keep writing until all your fears and worries and logical reasonings as to why you should not/could not do that are all on paper, and you find that you have written to plan of how to get to that YES

Now go out and do it! Better still, at the end of the Year, write down what it was, and how you got there, and send it to me! I want to start a Treasure chest of Triumphs!

1.to take or clasp in the arms; press to the bosom; hug.

2.to take or receive gladly or eagerly; accept willingly:

to embrace an idea.

3.to avail oneself of:

to embrace an opportunity.

to embrace Buddhism.
5.to take in with the eye or the mind.
6. to encircle; surround; enclose.

7.to include or contain:

An encyclopedia embraces a great number of subjects.
What immediately came to me, sitting on a plastic bag on a bench by the river at 00.05, 1/1/15 (floods over Christmas meant the benches were really muddy and I was well prepared!), was to EMBRACE those aspects of life  which I normally spurned/criticised/feared, and see what I had been missing! Also, to EMBRACE myself – those aspects of myself which I daily spurn/criticise/fear.

Allow yourself to acknowledge those things which scare/annoy/frustrate you, and to wonder (preferably in writing) what it would be like to embrace them? And as Henrietta Klausner(author  of Write it Down, Make it Happen) says, what might be the outcome of the outcome, and the outcome of that outcome….

Ask yourself the question “And because of that… then’ and keep asking, until you arrive at what, at depth, is important to you in Embracing whatever it is you are writing about. I am sure that in the process of this process, you will find the motivation to overcome your objection…

Wishing you a wonderful New Year, in which you Dare Greatly, say YES, and EMBRACE, and create a Treasure Chest of extraordinary memories for which to be thankful this time next Year!